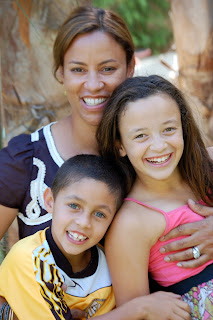 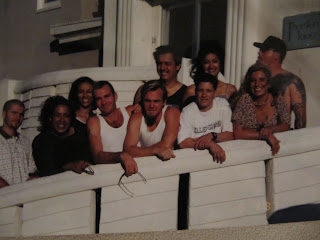 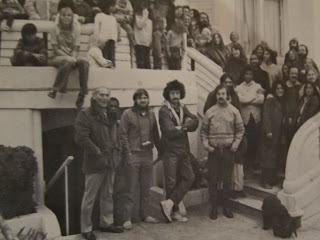 Right: From the book, Venice of America, our family and neighbors, Thornton Ave. Venice 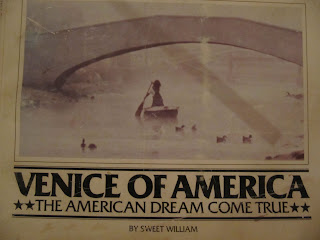 Venice Of America By Sweet William, 1976 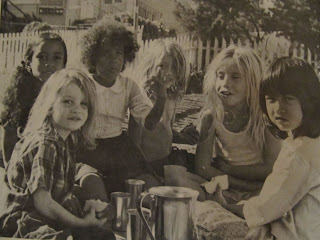 From the book, Venice of America. Birthday party at our house, 22 Thornton Ave. Venice.
Me with ponytails. To my right, my late sister, Nani.

I thought it would be interesting to quote two celebrities who have strong (and controversial) opinions about parenting. Supermodel Gisele and Mayim Bialik have both been outspoken about their personal parenting opinions, both quoted in People magazines and other national publications. I asked the question, “Are Celebrity Moms Too Perfect” as the lead-in to Jenny’s piece.

Wow! Mayim responded with a blog piece of her own. That’s great. What astonished Jenny and me were the comments left on this blog by Mayim’s followers (otherwise known as “trolls” or people who leave nasty comments on blogs they don’t usually read).These were some of the most hate-filled, ignorant and angry comments I’ve seen on a blog. Here are a few choice comments by anonymous posters:

“By pulling headlines and making up stuff, you just look dumb.” “Anonymous”

“What pathetic judgmental drivel! Jealous much?  Oh and Josie, you are kidding right? How much did you research your CHOICE to inject toxins in your child’s blood veins? Trust me I know WAY MORE on the topic than you do! So yeah, I am a better parent if I took the time to research fully and not just take doctors (who are human and failable and many are just as ignorant and ill informed as many parents they are leading on) on their word seeing as they have the pharmaceutical reps in their back pocket!   And what do you know about homeschool? Except that you would be a terrible homeschooling parent.  Get a life lady, you have no clue about the world around you! “Anonymous”

(Note: the troll above misspelled the word “fallible”)

What very few people know about me is that I may not be a “typical” private elementary school mom. I was raised in Venice, CA. We moved to Topanga when I was 10 years old. I was home-schooled until 4th grade, when I enrolled at Topanga Elementary School. We were strict vegans. That meant no animal products and in addition, no sugar, white flour or anything else my parents deemed to be “toxic”.We left many activities like the Girl Scouts and other official functions because they served cookies or meat. It was strict and extreme.

Mine was a hippie family, in every way. From Bob Dylan, Jimi Hendrix and Black Panthers as idols to the “it’s ok to be nude 24/7” attitude. My mom was African American. My dad, white. We were the only—or one of the only– mixed race families in Topanga as far as I could tell. How do I know that? I was called “Zebra” too many times to count. The first time I went to the dentist, I was 12 years old. I had more than 25 cavities, that took a year to deal with. I lost 2 teeth as a result. I never saw a pediatrician. Headaches were not treated with Tylenol, but instead with herbal tea. My parents followed various Indian gurus, did yoga and lived a rather secluded life. We gardened, ate organic and composted. We shopped at health food stores. We didn’t have a television. My parents smoked pot. Our clothes were from thrift stores. We didn’t, however, live on a commune.

Death Without Doctors. When I was about 11 years old, the unimaginable happened. My mom, age 40, was self-diagnosed with breast cancer. She told us she injured her breast running on Venice beach years earlier (not true). Over time, she became very ill. She didn’t believe in Western medicine and refused to see a doctor. She was tired. She lost weight. By the time I was 17, she was extremely ill. At home, my sister, dad and I cared for her the best we could. No nurses or hospice. I’ll spare you the worst details, but if you’ve ever taken care of a dying person, it is something I wouldn’t wish on anyone. The suffering of my mom is etched in my mind forever. She flew to the Phillipines to seek treatment from a holistic healer. It didn’t work. I begged her to live. I told her I still needed her, that I was only 18. She got sicker. Still no doctor. Paralysis set in. Then blindness. Brain damage. Coma. Death. I was 19 years old. She was 50 years old. I miss her every day. Somehow, I picked up the pieces of my broken soul and went off to UC Berkeley. My late sister also went to Berkeley and then to Harvard Law School (that’s how she met my husband, Barry, and introduced us).

Seeking Balance: Since I’ve had kids, I’ve realized that balance is key in all aspects of my family’s life. Celebrity moms influence us, without question. We look to them as perfect, even when we know they are not. My family isn’t vegan, but there are vegan restaurants we go to (I love Vegan Glory on Beverly Blvd.). We eat organic sometimes. I could care less how much sugar my kids’ progressive school serves on Halloween.

My Life Now: So there! Now you know a little bit more about me. I’ve lived the bohemian life. I know it inside and out. To me, it’s not glamorous. But, it’s the right choice for some families. Just not mine. What am I like now? I love Prada and Chloe handbags. I wear J. Crew and 7 For All Mankind jeans. My politics are left-of-center. I spent years working on staff for LA County Supervisor Mark Ridley-Thomas. I married someone from a wealthy, conservative Jewish background. Our upbringings are totally dissimilar. I’ve never met his parents because I’m black (or according to them, an “N” word).We give as much money as we can to charities, progressive elected officials and our kids’ school. My favorite writers are Cormac McCarthy, J.M. Coetzee and Toni Morrison. I never, ever shop on sale and I can’t stand vintage clothing. Oh, and my medicine cabinet is filled with Tylenol and other good stuff.

One of the things I loved most about my family was their tolerance for everyone. That, my friends, is absent in Mayim’s follower’s comments on this blog. As for those celebrity moms who give interviews about parenting to national magazines? If you can’t handle having your quotes repeated, don’t say them in the first place!