Skip to main content
I saw this brilliant poster on The English Muse and thought I’d share it. It’s by madmanincognito on etsy 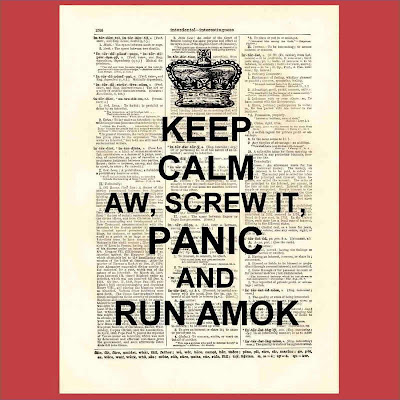 The Daily Truffle posted a list of celebrities who graduated from Los Angeles area schools. Although L.A. is thought of as a city of transplants, natives can be found hiding in the manicured landscape. And I should know, since I’m one of them.

Having grown up in Beverlywood and attended Crossroads from 8-12th grades, I was amused by the Truffle’s list. It was, of course, heavily weighted toward the obvious sort of celebrity (I saw no brain surgeons or physicists on the list, although I’m sure there are some who graduated from my alma mater). And it made me think about the celebrity kids I went to school with, as well as the exposure to the celebrity culture my daughter might have as she makes her way through the L.A. private school scene.

I graduated from Crossroads in 1986, along with a good number of immensely bright and talented people, some of who are now mildly famous. Take, for instance, Anthony Wilson, an incredible working musician who plays guitar all over the world, or the bluegrass singer Gillian Welch.  Matthew Tyrnaur, a roving editor for Vanity Fair who wrote, directed and produced last year’s documentary, “Valentino, The Last Emperor,” is a huge talent. How about Richard Rushfield, a terribly sardonic writer who, after publishing a couple of books, has finally hit his stride with the recently released American Idol: The Untold Story.  Another example is Crossroads alum Maya Rudolph, who’s simply one of the funniest women ever on SNL.

Here’s the rub, though: for every superbright, very accomplished, fabulously erudite alum there are the duds who ruin it for everyone. While I can crow about my talented aforementioned classmates, there’s a Crossroads wall of shame, too. Poor Gary Coleman graduated in my Crossroads class. Performance genius Peter Sellars’ daughter, Victoria, went to Crossroads as well (her nickname was Pebbles, she has since been in porn, say no more). And, finally, just to utterly destroy any sense of pride I might have had, mental giant Brody Jenner  (of reality show “The Hills” fame) graduated from Crossroads, too. Not exactly a sterling endorsement.

Perusing the list further, I came to the conclusion that, if you want your kid to have mega studio contacts, sending the tyke to Crossroads or Harvard Westlake is probably a sound move. There’s a ton of kids of Hollywood power players at these schools, and since Hollywood is merely an extension of high school socially (although played for higher stakes), there’s value in who you know. When I looked at Buckley’s “star” alums, though, it seemed resolutely “D” list: Paris Hilton, Alyssa Milano, Melissa Rivers.

The determination I’ve made is that sending kids to school with celebrities is probably unavoidable in Los Angeles, but not really a positive. It’s one thing to get a great education and then go out there and conquer the world, but that’s not what celebrity kids do. They are a distraction from the education, a sort of private school sideshow that titillates the ordinary students, but ultimately adds nothing to the academic experience. I may have graduated with Gary Coleman, but I do not remember him in any of my classes. He was like a celebrity ghost.

Now that my daughter attends Mirman, I wander around the campus sometimes, looking for the evidence of celebrity. I haven’t found it. It may exist there, somewhere, but at Mirman academic accomplishment seems to trump all. Whether they’re figuring out a math proof, composing a poem, or performing in a play, the school’s emphasis is on who you are as a person and what you can produce, not where you came from and who you know. And who knows? Anna just might be sitting next to a future Nobel Prize winner, or the inventor of the next Facebook, or maybe just a really good, really nice kid who will be her loyal friend forever. You never know.

Editor’s Note: The Willow’s School has had it’s share of notable celebrity kids. The daughters of Bruce Willis and Demi Moore were students there. So was Courtney Love’s daughter. And Steven Spielberg’s kid. There is currently a major, A+List celebrity family at the school. For privacy reasons, I won’t mention the name. But, it does make for fun “star-sightings!”

If you’re nervous about your kid’s “playdate” or “visiting day” at the schools where you’ve applied, you’re probably not alone. Who wouldn’t be nervous taking their child to a new school to “play” with a mock class of 20 or so other kids they don’t know? As I’ve said before, this part of the process was the most disconcerting aspect of the entire admissions process for me. I found it VERY stressful. It’s like a ridiculously bad dream that you’re unable to avoid. But, we got through it. And, so did thousands of other parents and their kids all over Los Angeles that year. And every year.
You really have very little control over what happens during the “playdate” or visiting day. Your child may be excited and enthusiastic or not. They may be hesitant or reluctant. Most schools know everyone will be nervous. Admissions directors do try to make the environment as relaxed as possible. They know you may be tense and your child will be picking up on your demeanor. Trust the school to make the day as low-key and stress-free as possible. That’s part of their job!
My advice? Try not to over-think the day before (or after) it happens.
Oh, and whatever you do, don’t send your nanny to take your child to visiting day.
We discuss visiting days extensively in Beyond The Brochure. I’ve also written these posts about my daughter’s visiting days. Guest blogger Jenny Heitz has also shared her visiting day stories too.
We hope this helps!
If you would like to attend this event, RSVP by 4/7 to Dyanne Chae by clicking on: dyannechae@gmail.com
To enlarge flyer, click on it 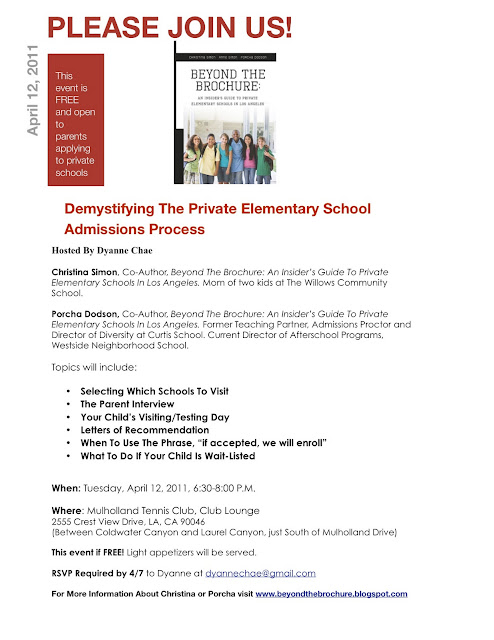 Just the thought of them makes many parents anxious. Speaking the words out loud can elicit a cold sweat. For the last 8 months you have been through the ringer known as the admissions process. The results of your efforts and the school’s decision will be mailed to you soon. So, now is the time to prepare for your next step. The good news is that it’s easier than the admission process itself.

Update: Many schools now email letters to parents. Some schools use a computer system where parents can log on to find out if their child has been accepted. And, a few schools still send letters using the post office.

There are three kinds of admissions letters school send out:

Acceptance Letters: Remember applying to college and how your joy would be determined by the size of the envelope you got from a school? That is not always the case with private school acceptance letters. Sometimes they are just that: a standard letter, not an 8 x 11 envelope. If it is just an envelope, it will be followed with a thicker, larger envelope that will contain a contract, probably a fee schedule and a handbook. The most important thing you can do is READ the contract. Next week I will go into the types of typical clauses you’ll find in a contract and how to choose the right school if you are accepted to more than one. Note: Many schools have now adopted the practice of emailing parents and the students (if they’re in middle school) of their acceptance, as well as sending a letter. Emails will be received on Saturday.

Wait-list Letter: This letter states, “We like your child but feel other candidates are a better match.” It is painful to read but not hopeless. If you are on a wait-list, it means that you still have the opportunity to get your child enrolled. There are a few key steps to take to help improve your child’s chances of enrollment that I’ll give you in an upcoming issue. Some schools send out wait-list letters instead of non-accept letters. This just pisses me off! Many schools do this under the guise of wanting to make sure that every parent feels good about their school. A school should have the courage to tell a family that they are not a good fit. I have met many a family who has lost all respect for a school when they find out that not one parent who applied received a non-accept letter. It’s dishonest and disrespectful to an adult.

Non-Accept Letter: This is by far the hardest letter to receive and it always comes in a thin envelope. Expect a wide range of emotions to surface: panic (What will I tell my child?), rage (How dare they?) and sorrow (What will we do?). For mothers, it often leads to a feeling of failure. Give yourself time to grieve, for that is what you will probably do and that’s ok and normal. In a few weeks I will share with you what other mothers have said about getting through their own disappointment. So there you have it, the three kinds of admission letters. One last thing to keep in mind is that this is just like getting or not getting a job (or auditioning). You will never know why a school accepted or didn’t accept your child. This can be very difficult to live with at first, but know that calling a school and demanding that they explain themselves is NOT a good idea, even if it feels like it might be at the time.

Simple Action Steps: NOW is the time to be going back to the schools that you really liked. You will have two weeks before contracts are due, so go back and take a second look at your favorite schools.

1. Call up your top 3 school choices.

2. Ask to attend an event: a pajama story time, a performance or even an auction.

3. When you are at these events, talk to the parents and observe the kids. Are they exhibiting skills, behaviors and attitudes that you want your child to exhibit? Are the parents friendly and open? Some of my clients have changed their minds about a school just from doing a simple visit like the ones suggested above.

Kim Hamer is the former owner of Get Into Private School. She closed her business a few months ago to take a wonderful job with charter schools. We wish Kim the best in her new endeavor. Kim’s kids attended Windward and PS#1.