Beyond The Brochure Has Been Seen In:

“Guilty Admissions: The Bribes, Favors and Phonies behind the College Cheating Scandal” by Nicole LaPorte, February, 2021.

Advice For Parents About Admissions & Waiting Lists, on CBS-Los Angeles (Channel 2) on March 15, 2017.

How To Get Your Kids Into The Country’s Most Competitive Kindergartens in DuJour Magazine, February 18, 2016

Elon Musk Creates A School in Business Insider, May 22, 2015

Harvard Class of 2028 Or Just Another Preschool? on XOJane

Beyond The Brochure named one of L.A.’s best mom blogs 2013 by Mommy Poppins.

Pricey Summer Camps For LA Kids: Where Do You Summer? on The Daily Truffle, June 9, 2013

Q&A With Wildwood School’s New Director of Admissions in the Venice Patch.

Fundraising at L.A. Private Schools on The Huffington Post, February 25, 2013

Fundraising at L.A. Private Schools on The Daily Truffle, February 20, 2013

The Hollywood Housewife recommends Beyond The Brochure (and writes about her own preschool search).

Blog Review: March 19, 2012: Beyond The Brochure selected as one of L.A’s best blogs by Red Tricycle

Beyond The Brochure Book Reviews: 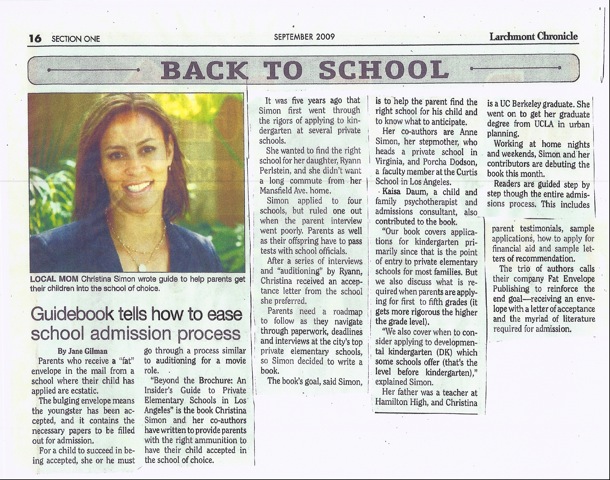