The LeapFrog MyRobot Friend iOS app is a fun, fast moving educational strategy game that requires kids to utilize basic programming skills to guide a robot through a maze to find a chest of gold.

My 9 year-old son loves math, numbers, games and computer apps. So, I figured this app would be perfectly suited to his age and interests. I was right! He was captivated by it from the minute I downloaded it to his iPad.

Sitting at our dining room table, he quickly became engaged in the game for more than an hour. My 12 year-old daughter burst into the room and asked him what he thought of it, since both my kids have used many Leap Frog products over the years.

“It’s really cool!” he answered before shouting “Yeah!” after completing a level and moving onto the next one.

The LeapFrog MyRobot Friend iOS has 80 levels, increasing in difficulty from basic to increasingly advanced math, reasoning and directional calculations the user must program for the robot to successfully conclude a level and advance to a higher level. Along the way, animals and other obstacles are encountered and must be dealt with for the robot to capture the chest of gold.

The MyRobot Friend iOS is basically an introduction to robotics, currently one of the most popular elementary and middle school programs right now. Similar to robotics, this app requires the user to program a robot through various obstacles, each with an increasing level of difficulty.

As he explained it, my son was able to program the robot using numbers, addition, subtraction, directions (North, South, East, West) and other instructions before setting the robot off on its course. If the user makes a mistake, “undo” is available. The higher the level, the more complex the user instructions must be. I gave it a try at one of the lower levels and with my son’s help, was able to get to the chest of gold.

With names like “Drone Target” and “Boom Boom” this app totally intrigued and challenged my son. He progressed to level 13 before we stopped for dinner and he’s excited to continue with the higher levels tomorrow! Determined to advance to level 80, this clever app promises to be a regular part of his iPad use.

The LeapFrog MyRobot Friend iOS app, with its colorful, 3-D animated touch screen graphics and the potential for a challenging degree of difficulty is perfect for my son.

I like the fact that this app requires a kid to think through a short or very long sequence of navigational steps and actions the robot will make before hitting the button to allow the robot to move. If the kid’s strategy is correct he or she has successfully programmed the robot to capture the chest of gold!

Available for $3.99 for iPad and iPhone. Ages 7+.  To purchase the LeapFrog MyRobot Friend iOS, click on the link HERE

I was selected for this opportunity by Clever Girls Collective but content and opinions expressed here are my own. To take the LeapFrog Reading Month pledge, please visit their Facebook page. #LFReadingMonth #spon

Recently, we’ve received several reader emails asking what they should wear to parent coffees and other private school admissions events.  A few moms said they were very nervous about what to wear (in addition to being anxious about the events!). I was also stressed about what I should wear for our daughter’s kindergarten admissions events so I know the feeling!

Here are a few tips:

I’m no fashion expert (or fashionista) by any means, but I have learned a few things after going through the admissions process twice. You will see every type of outfit imaginable at these events, from head to toe Chanel to grunge rocker. When I attended admissions events, I usually chose a blazer, trench coat or casual jacket, black or dark wash jeans and silk tops, with accessories, for my events. The look that’s best for me is effort at “Mom On The Go”. I’m tall (5’10) so I usually wear flats.  See photos below for what I’d wear! 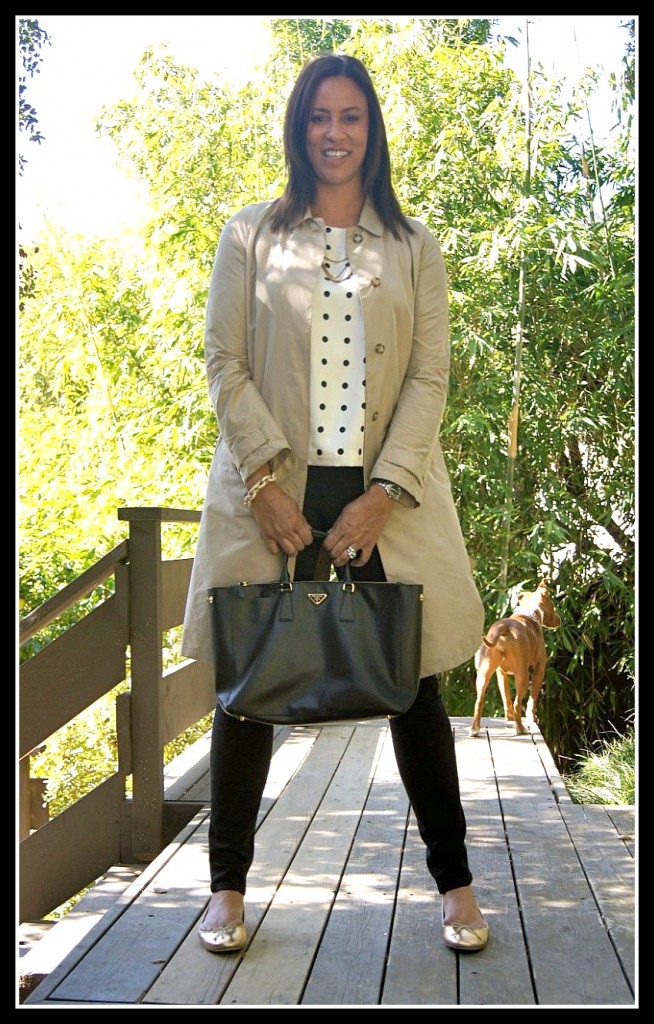 I’m so thrilled to be guest blogging over at The Daily Truffle, one of my favorite sites. The site is written by private school graduates from L.A. (Harvard-Westlake, John Thomas Dye and others) and calls itself A Los Angeles Social Diary. – Christina Simon

Here’s an excerpt of my piece :

Springtime in L.A. is the season when private grade schools host auctions, gala events, and swank soirees at fancy hotels, studio lots, and LA country clubs designed to raise additional funds to pad the $25,000 base fee of sending kids to ‘John Dye’, Buckley, Curtis, the ‘Center’ and all the other early educational top LA tickets.

That might sound high but the $25k tuition doesn’t even cap the operating budget of any private elementary school and additional money is always needed for teacher salaries, employee benefits, school supplies, and financial aid.

To continue reading, click on the The Daily Truffle

*This piece is also featured on The Huffington Post today (Feb. 25).

I was so excited to be invited by Kristen Cruz, the awesome morning co-host on KOST 103.5 FM to talk about getting into private elementary schools. Kristen is a mom of two kids. Sorry, the link is no longer available.

Co-hosting a lunch at my home for some of L.A.’s most fabulous and inspiring mom bloggers was one of the highlights of my week!

My family and I were in San Diego for my son’s soccer tournament last weekend. Lots of fun!

Momangeles and I put together a fantastic list of summer camps for kids ages 4 and up. These include camps at private schools like Willows, Brentwood, Curtis and more! Click on Momangeles.

Have a great weekend- Christina

If you can name that school, leave a comment! Check back in a few days for the answers.