If you’re wondering whether you’ve applied to enough schools, there are schools with January 2012 application deadlines. In Beyond The Brochure, we discuss this issue in detail. Obviously, there’s no perfect number, but if the schools you’ve selected are super-competitive, consider adding one or two more to your list.  Here are a few schools with January 2012 admissions deadlines:


Campbell Hall: The deadline for all applications is Friday, January 27th, 2012.


St. James Episcopal School. Submit your application to the Admissions Office with the $100 non-refundable application fee as soon as possible, but no later than January 13, 2012. Late applications received will be considered after April if space is available.


See previous posts about: School tours and A-List School Tours, My school tour process, What If We Don’t Love The Schools We Toured? and Apply to the schools you like

When my daughter was born 11 years ago, I felt strongly that I needed to create a new family tradition to honor my mother who died when I was nineteen. But, what could I do that would be a tribute to her at the same time it celebrated our new family? Food immediately came to mind.
Once I decided to use cuisine as a way to remember my mom and introduce her heritage to my children, I needed to find the perfect dish that would accomplish this complicated goal. My mom was African American, born and raised in Joplin, Missouri.  She was Southern, but loved Los Angeles, where I grew up.
To continue reading click on MomsLA.

I am a “member” of an online mommy group. It’s a group that, by virtue of a very efficient moderator, has been stripped of any political, humorous, or timely posts. Instead, it has become an online referral source, sort of like a no fee Angie’s List, that seems to be the country of “cheap.”

Now, before you decide I’m some crazed spendthrift, let me assure you that I’m not; I enjoy a bargain just as much as the next person. I do, however, try to keep the bargain buy phenomenon in perspective. I believe in paying for quality. I believe in passing down gently used goods when it’s appropriate. But, I draw the line at looking for bargains when it comes to people.
You know what I’m talking about. There’s a constant search on these online groups for nannies, housekeepers, gardeners, and handymen. The demands are heady: adjectives like “flexible” (in terms of schedule, we assume, not physically), “trustworthy,” “CPR trained,” “licensed,” “compassionate,” and “self motivated” are rife within the posts. But, the other adjective (and synonyms thereof) found accompanying this laundry list of requirements is, invariably, “cheap.”
Now, “cheap” is not an adjective one usually associates with quality. “Cheap” is something shoddy, second rate, cut rate, or even promiscuous (probably not the right definition in this case, but you never know). How this adjective gets paired up with such a lofty list of other requirements is amazing to me, a kind of domestic cluelessness.
Because, you see, the people hired to help you run your home, care for your children, and maintain your home’s physical integrity and exterior décor probably shouldn’t be “cheap.” By hiring “cheap” or underpaying domestic help, it demeans the important jobs these workers perform, and it seems to imply that those who want “cheap” labor don’t really value their homes or children (something that I’m pretty sure is not the case).
Yet, the people I’ve recommended to the group, per requests, have usually had negative experiences. Things like a housekeeper being offered fifty dollars per “day,” a “day” being described as from 9-2, cleaning a four bedroom, four bathroom house and cooking a reheatable dinner. That’s a lot of work for more than a half day for inadequate pay; a really bad deal for any housekeeper. And when the potential employer called me for a reference, her question to me was : “Is she going to trash my house?” Yeah, sure, I felt like replying. That’s why I employed her for seven years.
One time I recommended a really wonderful handyman. This guy has done tons of work for me, plus he’s just great to have around, so trustworthy. All of us have hung out and our kids and his niece and nephew know each other. But every time he went to consult with a potential job gotten though the group, it always ended with an argument over the price and a decision to either put off the work or do it themselves. In other words, it was always a waste of his time, and he won’t do referrals for the group anymore as a result.
Why is there this fundamental lack of respect for household help? Why is it so undervalued, so thought of as cheap labor? Since when is hiring someone to perform a job an expectation for getting something (actually, quite a LOT of something) for next to nothing?
I have written about these issues before. One commenter accused me of being “anti working mother” because I dared to criticize (indeed, parody) the request of one mother looking for the going rates for both legal and illegal nannies. First off, as a semi-working mother, I most certainly would never criticize the real concerns of other working mothers. In fact, I’m so pro-working parent that I even consider the nannies, housekeepers, and handymen I hire to be working parents, too, deserving a living wage to better their children’s lives.  Yeah, that’s right, they have families too.
In the end, I think the quest for “cheap” actually cheapens the poster, the group, and the referral pool. Why should I refer someone I deeply value and respect, only to have them be humiliated? Plus, although this group is relatively large at around 750 people, I have a feeling a large percentage of them aren’t in the poorhouse. If you’re looking for domestic help to begin with, you must have extra money to spend, so why be a cheapskate? By hiring someone at a good wage, you not only let the employee know that you respect his or her time and talent, but that you respect your own space as well. And that would be keeping it, in the immortal words of Will Ferrell, “classy.”
* Originally published on The Twin Coach

Jenny Heitz has worked as a staff writer for Coast Weekly in Carmel, freelanced in the South Bay, and then switched to advertising copywriting. Her daughter started 4th grade at Mirman School last year. She previously attended 3rd St. Elementary School. Jenny has been published recently in the Daily News and on Mamapedia, The Well Mom, Sane Moms, Hybrid Mom, The Culture Mom and A Child Grows In Brooklyn. She now writes about gift ideas and products on her blog, Find A Toad. 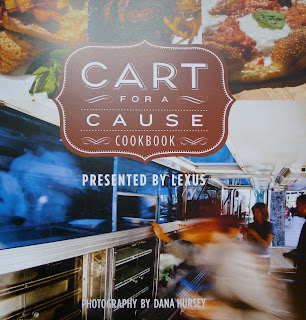 * Congratulations To Our Giveaway Winner, Adrienne!
As a thank you to our wonderful readers, we are holding our first giveaway that isn’t a copy of Beyond The Brochure. This giveaway–a $100 gift card for the Akasha Restaurant in Culver City (one of our favorite places!) AND a celebrity chef cookbook– is the perfect solution to your search for a fabulous item to donate to your preschool or elementary school auction or fundraiser. Restaurant gift cards are always hot ticket items at school fundraisers! Or, enter to win it for yourself or a gift for a friend!
Enter to WIN a FREE Akasha Restaurant Gift Card For $100 and a copy of “Cart For A Cause,” fabulous cookbook featuring Chef Akasha and numerous other talented and celebrity chef’s recipes ($25.00). All proceeds from the cookbook go to benefit St. Vincent Meals On Wheels.
It’s easy to enter! To enter, leave a comment on our blog telling us why you would like this gift card and cook book package. You must leave your email (you can avoid spam by using format csimon2007 at gmail dot com)
Deadline to enter is Wed. Dec. 22 at 6:00 p.m. Winner will be selected at random.
We aren’t requiring you to subscribe or “like” us on Facebook! but we’d love it if you did!
About Akasha Restaurant, Culver City: www.akasharestaurant.com
AKASHA fea­tures New American cui­sine offer­ing com­fort food with big fla­vors and sus­tain­able ingre­di­ents, for car­ni­vores and her­bi­vores alike.
Akasha is a self-trained chef and artisan-style baker who has been cater­ing events in Los Angeles and other parts of the coun­try for over twenty years. She began her pro­fes­sional career at the Golden Temple, a now defunct but once pop­u­lar veg­e­tar­ian restau­rant in Los Angeles. It was in this kitchen that Akasha dis­cov­ered her pas­sion for mak­ing deli­cious dishes with good-for-you ingre­di­ents. After the Golden Temple she became Michael Jackson’s per­sonal and con­cert tour chef. AKASHA is her first restau­rant ven­ture, the result of a vision she has had for many years.
Her cook­book HOLLYWOODDISH includes tales of Hollywood’s 100-year pas­sion for organic foods and healthy lifestyles and sto­ries of her favorite cook­ing expe­ri­ences: mak­ing hol­i­day din­ners for Billy Bob Thornton, cater­ing par­ties for Pierce Brosnan, pro­duc­ing events at the Sundance Film Festival, and work­ing as a pri­vate chef for Barbra Streisand.
She lends her time and exper­tise to groups such as Share Our Strength, Environmental Media Association, Common Threads and Pediatric Aids. She has appeared on The Food Network (The Best Thing I Ever Ate), Access Hollywood, Entertainment Tonight, Planet Green, and nation­wide news programs.


The Los Angeles Times uses words like, “enticing, simple, gusty” to describe the cuisine at this “wildly successful” place with a “hip urban vibe.”