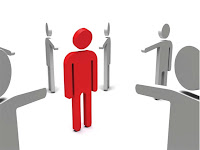 I have always fully admitted that I didn’t have a good adolescence. As a smart, somewhat dorky, gawky and bespectacled 13 year old, I entered a fancy, very well known private school. I was a year late because my parents had sort of dropped the ball on the whole middle school thing, so I ended up at Palms Junior High School for 7thgrade (a scary disaster, and then my parents scrambled to get me out of there).

My being a year late to private middle school wasn’t helpful, although in retrospect I don’t think starting in 7th grade at Crossroads would have made a difference. The sort of social scene present there in the early ‘80s was like something out of a John Hughes movie, except with palm fronds waving in the background. The popular girls were very tightly controlled by one girl in particular; she had bigger breasts and was meaner than the rest. Apparently, the other girls had to call this one girl every morning, just to make sure their outfits wouldn’t clash with hers.

My experience in classes with these girls was either that they completely ignored me or laughed at me behind my back. It really didn’t matter if there was a good reason or not. If I did well on, say, an oral report, it got turned into a negative (“You really memorized all that?” one of them asked me once with a sneer). The other option was no response whatsoever, as if I weren’t really there. Once, in 9th grade, I had a Cellophane temporary hair color go awry, turning my hair fairly purple. By 10th grade, this would be common place, but naturally I had to inadvertently be the school pioneer in hair dye. As I skulked through the halls with my hair ablazing, one girl’s announcement was thus: “She just wants attention. Let’s just ignore her.” ‘And how would that be any different from any other day’, I thought to myself.

Sometimes the popular boys followed the mean girls’ lead, making nasty comments about my lack of a bra size, or the aforementioned purple hair (one boy’s comment: “Did someone have her period on your head?”), or somehow turning my good grades into a negative. By sixteen, I was a black haired, black dressed, sulky nightmare of a teen; my parents nicknamed me “The Widow.” I was unfriendly, inadvertently channeling Ally Sheedy’s character in “The Breakfast Club.” Alternately being treated like a nobody or like a freak really weighed on me. Needless to say, college was a relief. Not only could I start over, but college kids weren’t really interested in that sort of victimization, anyway.

Cut to years later, on Facebook, becoming Facebook friends with that head mean girl. She “friended” me; I didn’t seek her out. And I honestly wanted to be the bigger person. After over twenty years, it seemed time to be a grown up. Those days were long gone, right? We exchanged pleasantries and I even featured a book she wrote on my blog. Why not let bygones be bygones.

But then one day, something snapped. A picture was posted online of three of the popular mean girls from my class (including the Facebook friend). It was probably taken a couple of years ago, at the beach, and there they were, the Trifecta of Terror. They looked very much the same. And viewing the image caused me a visceral reaction of rage and shame. Wow. ‘Up yours,’ I thought, staring at their self-satisfied faces with venom.

The funny thing is that those girls so many years ago weren’t even that awful. For all I know, they felt as horrible and awkward and bullied as I did (I’m really, really trying to be very adult here; the main mean girl had even posted, ironically, an anti-bullying article on her updates). These days, girl terror takes on sinister levels of sophistication, using emailing and texting and god knows what else to humiliate the victim.  I never had anything like that happen, yet my reaction to those relatively mild tormentors was strong. What will a truly cyber-bullied girl feel years from now?

I think of my daughter, who so far has been able to shake off any nasty mean girl behavior (and who, at least so far, doesn’t seem like a mean girl herself), and I really hope she keeps her sense of self as adolescence approaches. Because as much as I firmly believe in getting over things and getting on with life, some things, like the mean girls, appear to endure, sneaking up to sucker punch you on your Facebook page.