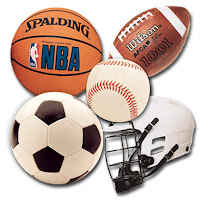 The Westside of Los Angeles long known for its doctors, lawyers and entertainment industry denizens, is suddenly a hotbed of athletic talent.  Yes, those are professional team scouts crawling the corridors of Westside private schools looking for the next Tom Brady and Kevin Durant.
That is, if you believe the hype of parents in this upscale area that they have magically produced from their not-so-athletic genes super-athletic kids ready to rise above their lineage.
My 7-year old son is in his third year of playing various recreation league sports in Los Angeles.  Fall soccer and flag football, winter and summer basketball, more football in the spring.  Sports camps all summer.  Sprinkle in various skill clinics and tennis lessons and he is a busy little guy flexing his athletic muscles.   It’s a great way for him to meet friends, learn about leadership and teamwork, and burn off endless energy.
Where will it lead?  Who knows? Hopefully he enjoys it and can keep playing the sports he loves most through high school.   Then he can go on to a good academic college and watch his otherworldly little buddies on national TV as they fulfill their parents’ dreams playing Division 1 ball.  I have changed names to protect the innocent (many of whom have already been signed by top agents).
Paul B.  His father, a chunky lawyer who throws like a girl, told me when the boys were 5 or 6 that his son is such a talented baseball player that he doesn’t have to save for college.  A scholarship at USC is in the bag.  Unfortunately, by age 7, the pressure is so intense on poor Paul he gets headaches and phantom injuries and leaves mid-game whenever his team falls behind.  Happened to Nolan Ryan, too, I’m told.  So all should be ok.
Danny J.  A multi-sport star with parents who average 5 foot 6.  Danny takes private lessons 7 days a week, 365 days a year.  He is a QB, pitcher, point guard and hockey goalie.   Danny’s parents scream at him from the sidelines, telling him where to go, what to do and how to do it.   I think I saw the Bradys doing the same during one of Tom’s three Super Bowls, so Danny is in good company.
Aaron M.  A basketball prodigy.  Never saw a shot he couldn’t force.  Some of them actually go in.  From really far out.  Good thing to, because he carries the ball like a football instead of dribbling and is frequently outrun by garden snails.  All he needs are a few tats and he’s got a shot at going straight from Hebrew School to being a lottery pick.
Then there is Scottie T.   This much-hyped kickster is a legend.  For two years his parents sang the wonders of his backyard soccer heroics.  Think Pele.  Ronaldinho.  Beckham.  Only better.  Finally, my son lucked onto a team with Scottie and I got to see the legend up close. $150 Nike cleats.   Crisp replica Lionel Messi jersey.  What a game this young man had.  Shots landing anywhere but in the net.  Passes perfectly placed on the foot of the opponent.   Sliding tackles…of the referee.  God how I wished Scottie could play goalie…for anyone but us.
Yes, the backyards of Beverly Hills and Brentwood are teeming with budding Bradys throwing perfect spirals.  And on the driveways, dozens of dandy Durants are dunking and draining jumpers on their way to Division 1 scholarships and a shot at the NBA.  Just ask the little superstars’ parents.  They will tell you all about it.
Barry Perlstein is the dad of a 2nd and 4th grader who attend The Willows Community School in Culver City, CA. He works in private equity. Barry has a B.A. in applied mathematics from Harvard University and a J.D. from Harvard Law School. He is married to Christina Simon, writer of this blog. They live in Hancock Park with their two children, ages 7 and 10. And, yeah, he’s funny in person too.
P.S. Here’s a very funny post on Parenting By Dummies about Amanda’s observations at her son’s soccer games called “How To Be A Sideline Dad”
Please follow and like us: