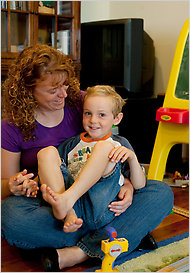 Suzanne Collier opted for a “transitional” year for John, 5, rather than kindergarten.

Suzanne Collier, for one. Rather than send her 5-year-old son, John, to kindergarten this year, the 36-year-old mother from Brea, Calif., enrolled him in a “transitional” kindergarten “without all the rigor.” He’s an active child, Ms. Collier said, “and not quite ready to focus on a full day of classroom work.” Citing a study from “The Tipping Point” about Canadian hockey players, which found that the strongest players were the oldest, she said, “If he’s older, he’ll have the strongest chance to do the best.”

Hers is a popular school of thought, and it is not new. “Redshirting” of kindergartners — the term comes from the practice of postponing the participation of college athletes in competitive games — became increasingly widespread in the 1990s, and shows no signs of waning.

In 2008, the most recent year for which census data is available, 17 percent of children were 6 or older when they entered the kindergarten classroom. Sand tables have been replaced by worksheets to a degree that’s surprising even by the standards of a decade ago. Blame it on No Child Left Behind and the race to get children test-ready by third grade: Kindergarten has steadily become, as many educators put it, “the new first grade.”

What once seemed like an aberration — something that sparked fierce dinner party debates — has come to seem like the norm. But that doesn’t make it any easier for parents.

“We agonized over it all year,” said Rachel Tayse Baillieul, a food educator in Columbus, Ohio, where the cutoff date is Oct. 1. Children whose birthdates fall later must wait until the next year to start school. But her daughter, Lillian, 4, was born five days before, on Sept. 25, which would make her one of the youngest in the class.

To read the rest of the article, click here: