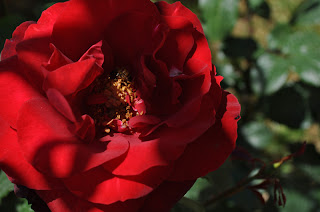 Recently, my daughter Anna (who is in her first year, 4th grade, at The Mirman School) had her first private school parent teacher conference. It was quite different from the previous public school parent/teacher conferences in the past (she previously went to 3rd St. Elementary), partially because this is the first year that her entire immediate family showed up.
By entire immediate family, I mean Anna’s father, Anna’s stepfather, and myself. We have never done this before, all of us at a conference, but it seemed time. Anna’s teacher didn’t skip a beat, referring to us as “Anna’s family” rather than parents. But perhaps the most gratifying thing to happen during the conference (besides discovering that Anna is doing very well), is that the teacher complimented us, saying “I don’t know what you all did, but Anna is the most well-adjusted child of a divorced family I’ve seen.”
I don’t believe the teacher was blowing smoke; she had nothing really to gain by saying such a thing. Still, I was filled with such a sense of relief and surprise. Not just because she was telling me my child was great, but because she felt comfortable enough to mention the “D” word at all. Many people will not. It’s sort of like cancer: people know divorce isn’t contagious, but they still avoid it when at all possible.
Perhaps, however, this is typical for Mirman. I don’t remember our family’s divorced status even being mentioned during our admissions interview (partially because we were never interviewed alone, but always with Anna). Mirman is incredibly child focused, so the intact or divorced status of the family is only relevant to them in terms of our child and her behavior. Compare that to our admissions interview at John Thomas Dye, where our status seemed front and center. There was a mention of acrimonious divorced families and separate parent interviews (we obviously get along; this commentary seemed unnecessary). I felt like we had to go out of our way to look like an intact family, even though we’re not.
Anna’s father and I split up when Anna was four.  Although that seems like a young age, it was old enough, and Anna was verbal enough, for her to have a violent and eloquent reaction. It was hard on everyone, but hardest on the poor kid who never asked for any of this. Her world exploded through no fault of her own, and she had plenty to say about it. Luckily, most of her ire was directed at me, not at teachers or acting out at school. It was rough.
It’s been five years since the divorce, and things have become very routine. As I was the first of my friends and acquaintances to go through this unfortunate process, I got very little useful advice (and forget those therapists and so-called experts, since many of them just contradict one another anyway).
So, when Anna’s teacher paid us this unexpected compliment, I thought back: how did we handle our divorce situation?
1. We did not fight about custody. An arrangement was set up immediately so that Anna’s schedule and life would become as predictable as possible.
2. We tried not to diss each other in front of her. A no brainer.
3. We set up two complete households. She has a room at each, stuff at each, and feels at home at each. We also kept the households within easy driving distance of each other, so that the back and forth is very easy.
4. I accepted the fact that Anna will always want the family intact. Children long for the idea of a complete family. My parents divorced when I was 21, and I still fall into reveries about them being together. It’s normal, and I wouldn’t even try to convince her that it’s really “better this way.” She wouldn’t buy that, and there’s no reason why she should.
5. When I introduced Anna to her stepfather, I was sure the relationship was going to stick. And it has. I didn’t want Anna to get attached to someone, only to have us break up. She’s had enough upheaval. Now, she’s close with her stepfather and enjoys the step family situation (but we were patient; she did her share of acting out).
6. We try not to vary the schedule. Anna has a right to know what’s going on and where she’s going to spend time. Last minute changes are reserved for emergencies.
To put it bluntly, we did all these things, Anna is good, but divorce still pretty much sucks. The Huffington Post can give Divorce its own blogging and news section (questionable taste, that), but that doesn’t mean it’s anything to take lightly.
I will say that Anna’s teacher’s masterful handling of our family fills me with gratitude. Her inclusiveness, her perceptiveness on the part of my child, and her willingness to address the divorced elephant in the room was such a welcome relief.  I’m very happy to have Anna at a school that recognizes her situation, doesn’t judge it, and lets her shine.
Jenny Heitz has worked as a staff writer for Coast Weekly in Carmel, freelanced in the South Bay, and then switched to advertising copywriting. Her daughter started 4th grade at Mirman School this year. She previously attended 3rd St. Elementary School. Jenny has been published recently in the Daily News. She now writes about gift ideas and products on her blog, Find A Toad.
Please follow and like us: