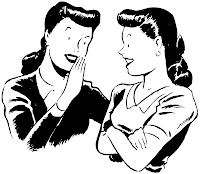 One of the toughest things I’ve found regarding my child’s school generally (from preschool on up) is making friends with the other parents. I have to face facts: I’m a bit of a malcontent, I barely have time for the friends I do have, and merely having children in the same class does not a meaningful friendship make. It always seemed contrived. Thus, at my kid’s public she attended until this year, I had no friends. And I didn’t care.

But this has changed direction upon her starting at the Mirman School. The school puts forth a concerted effort to get the parents together, and as resistant as I initially was, I’m glad about it. Recently, I attended a parent party just for her class.

When I received the evite, my first instinct was refusal. But I overruled that, since non-participation is always my first instinct. I tapped “yes” instead, and then viewed the Potluck Italian Dinner in Encino with a certain level of dread. Especially, (upon a more careful reading of the evite) when I discovered that parents were required to play “games.” Oh, god. I envisioned a bunch of Mensa members engaging in team level Sudoku late into the night. I am a math moron. This sounded bad.

All my fears turned out to be unfounded. The house in Encino was, by far, the best party house I’ve ever seen; the host and hostess were warm and fun. The food was good. The other parents were all surprisingly mellow; it’s been a very long time since I attended a party in L.A. at which no one discussed professions. And the talk of the kids was funny; no one bragged about their little genius. Indeed, many of the parents seemed puzzled to have such children. It was really refreshing. Sure, there were lulls in the conversation, but nothing overly uncomfortable. All in all, I’d get together with any of these people again.

And then there was the game-playing. A Minute to Win It, in two teams. The great thing about this game is that it has virtually nothing to do with either intelligence or physical prowess. It’s mostly about looking absurd. But since everyone played, it was a brilliant ice-breaker. People were laughing hysterically (the getting-the-Oreo-off-your-forehead-and-into-your-mouth-without-touching-it-with-your-hands task was really hilarious), and it sort of felt like a summer camp event. People left the party smiling and happy.

Were we all best buddies? No, of course not. But at least we all recognize each other, and can connect the parent with the child, if need be. Spending an evening with the class parents will now make working with them on various school events that much easier. It makes arranging play dates that much easier. And it’s just one more example of how, if you give the private school social scene a chance, it really can turn out well. Even for a curmudgeon like me.

One thought to “Guest Blogger Jenny: Insta-Friends At Private School”