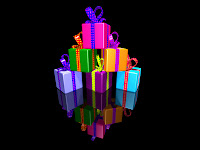 For years now, I have heard horror stories about holiday season at private schools. Rumor had it that super expensive gifts were an unspoken requirement, that the “group gift” given by all the parents forced the dropping of hundreds of dollars. This is fairly foreign to me. I may have gone to Crossroads a million years ago, but I don’t remember any holiday gifts handed out. Possibly the “gift” of not having to deal with obnoxious teenagers for two whole weeks was enough.

The definitive (and excellent) piece written on the gifting subject (specifically targeting Los Angeles private schools), was published in The New Yorker in 2004 by Caitlin Flanagan. Ms. Flanagan had firsthand experience with the phenomenon, with her progeny then attending The Center for Early Education. While she did make it sound like The Center had a new (in 2004) no gifts policy, she also made it clear that wealthy parents often ignore these edicts. Big gift item tales from other schools ranged from the truly over-the-top (Prince tickets) to bizarrely awful (green plastic shrimp forks). I wondered, then, how much, if anything, had changed since 2004?

Keep in mind, too, that my daughter attended Third St. Elementary for three years before switching to private school. Public school teacher gifts are pretty low key. Typically, a room parent would collect roughly twenty bucks from each family and then purchase a gift certificate at Nordstrom or its equivalent. One year, I gave a book on travel to one of her teachers who was particularly wonderful (he traveled extensively during his time off). It was mellow, partly because it was public school, and partly because the student body was so socio-economically diverse. And while Ms. Flanagan pointed out in her aforementioned article that Korean parents (who are legion at Third St.) have a cultural veneration for teachers, and thus give lavish gifts, I didn’t notice it (maybe they kept it on the down low).

So, I’ve been approaching the holidays with a certain degree of trepidation. We’re new to the school, we’d like to fit in, but spending hundreds of dollars on a teacher’s gift seems insane (especially since, at Mirman, she has a main teacher, an assistant teacher, and individual Music, Science, Spanish, Art, P.E., Violin, and Drama teachers (I’m sure I’m leaving someone out here, like maybe the assistants to all those specialty teachers). That’s a LOT of presents. And I’m not saying these dedicated educators, who work very hard and are devoted to the kids, don’t deserve recognition. They do, lots of it; just maybe not recognition in the form of Prada wallets or Lakers tickets.

Well, not to worry. Every good school has policies, and Mirman covers all the bases. Its gift giving policy advocates (I’m quoting here from the Info Manual) “…a voluntary policy for those wishing to give a token of appreciation to an individual member of the faculty or staff. In keeping with this policy, room parents are instructed not to collect for a group gift at either the winter holiday or the end of the year. Anyone wishing to show their appreciation should send either a note of thanks or a modest individual gift.”

Now, I guess “modest” is pretty subjective. What’s “modest” to a billionaire is far different than what’s “modest” to me. But I’ll take my chances on a card my kid makes and some Barnes and Noble gift cards in “modest” amounts. Maybe I’ll throw in my famous cinnamon nuts (a real crowd pleaser; recipe on my blog Find A Toad).

So that’s the scoop at Mirman on holiday giving. I know Willows Community School has a policy in which every family gives anonymously and it’s divvied up amongst the staff (a truly elegant and egalitarian arrangement, giving teachers and staff what they really want, which is cash). The average gift per family at The Willows is $100. I’ve heard rumors of far more elaborate expectations at some other very popular private elementary schools, but I have no idea if these are true.

So, readers, what has your experience been around the holidays at private school? Inquiring minds and gifters want to know! Leave a comment!