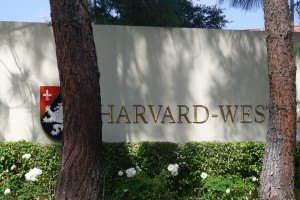 Have you been wondering which L.A. private elementary schools are “feeder” schools for Harvard-Westlake, a 7-12 grade secondary school? Here’s an article directly from the source: The Harvard Westlake Chronicle. It’s from 2007, but still interesting…

By Adam Sieff
A few years ago, two sixth graders from the Center for Early Education in West Hollywood applied for admission at both Harvard-Westlake and Brentwood Schools. Each school took one of the two students that spring as it prepared to fill their entering class.

But Harvard-Westlake Director of Admission Elizabeth Gregory soon found out from Center administrators that the student she admitted had actually indicated that Brentwood was her first choice.

Soon thereafter, the Brentwood admission office got word from the Center that the student they accepted had indicated Harvard-Westlake as their first choice.

A few phone calls later and Gregory was on the phone with Brentwood.

“The Center told us about it so we called up Brentwood’s admission office and switched kids,” Gregory said. “Everybody was happy.”

Feeder schools like the Center are prized because of their ability to fulfill a family’s first choice in secondary school admission.

While a student swap is not so common, it is common for feeder school administrators to make phone calls on a student’s behalf.

“One hopes parents are able to send their kids to a good school,” Center Vice Principal Lois Levy said. “We will definitely go to bat for a student, absolutely, but only honestly though.”

This year, the Admission Office indicates that there were about 1,035 students applying for admission to the Harvard-Westlake Class of 2013. Of them, around 95 were from three local feeder schools: the Center, the John Thomas Dye School in Bel Air and the Mirman School on Mulholland Drive. These three schools also appear to have the most success when it comes to offers of admission as well — 58 students, or 24 percent of the entering class, have matriculated to Harvard-Westlake from the three schools.

In the ninth grade, Saint Matthew’s School in the Pacific Palisades and Walter Reed Middle School in North Hollywood send droves of students annually, largely because they do not offer a high school, Gregory said.

So how exactly does a school become a feeder school to Harvard-Westlake? The quality of education, preparation and packaging of students may have something to do with it. So might the close ties school officials often have with Harvard-Westlake and current Harvard-Westlake administrators.

“Harvard-Westlake has always been a big draw for students from those particular schools,” Head of Harvard-Westlake Dr. Jeanne Huybrechts said. “It is very important that we continue to receive applications from the best and the brightest.”

Ray Michaud traded his morning trek through Coldwater Canyon Avenue traffic for an equally grueling excursion up Chalon Road in 1979. Now the Headmaster of the John Thomas Dye School, Michaud had served as Harvard-Westlake’s Assistant Head of Upper School until leaving to take on his current position. 24 students from JTD will be matriculating to Harvard-Westlake next year.

Michaud’s connection to Harvard-Westlake is a typical phenomenon of the other three large feeder schools: Mirman Headmaster John West was a dance and physical education teacher at Harvard-Westlake, and Deirdre Hudnut, named by West Magazine as one of the “most powerful people in Los Angeles,” is the wife of Harvard-Westlake President Tom Hudnut serves as the Center for Early Education’s Director of Admissions. Reveta Bowers, Director at The Center, also served on the board of Westlake School before it merged with the Harvard School in 1991.“I think it is very important to maintain strong relationships with these three schools,” Gregory said.

“I am still close with Elizabeth Gregory in the Admission Office and [Head of Middle School] John Amato, but there aren’t too many left from my day,” Michaud added with a chuckle.

This connected history between administrative leaders may certainly have contributed to the pile of manila folders in Gregory’s office. Michaud agreed: “My relationship with Elizabeth Gregory is very important,” he said. “Half our class usually ends up at Harvard-Westlake because we have developed a certain degree of integrity and trust over the years.”

The Admission Office also plays a part of its own when it comes to generating interest at those three schools. In the last two years, Gregory and others on the Admission staff have made recruitment presentations to John Thomas Dye, Mirman and the Center for Early Education.

“We like to generate as much interest in the school as possible, and these visits are a way of doing that,” Gregory said.

While the shared history between Harvard-Westlake and these feeder schools certainly seems to generate additional interest in the school, it is not necessarily the cause for the higher admit rates from those schools. These schools do a good job of preparing students for a career at Harvard-Westlake.

“It is true. Students from these three schools are better prepared,” Gregory said.

“They are high school preparatory schools. For the most part, they do not have high schools or middle schools that they are trying to hold onto their kids for. They pride themselves on sending their students to Harvard-Westlake. That is why parents pay to send their children there.”

In his February 2006 “State of the School” address, Michaud boasted “JTD students score 20-30 points higher on their ERBs than other elite schools within the National Association of Independent Schools. “Our type of academic program is similar to what is offered at Harvard-Westlake,” Michaud said.

“Our students begin a block schedule, moving from class to class by subject, beginning in fifth grade,” he added.

“It’s not only about the student when it comes to secondary school admission, it’s about the family,” Levy said.

Preparation begins in the fifth grade when students and their parents meet with members of the administration to preview the upcoming application process and find possible match schools. There is also a parent night in the spring of fifth grade in which the principal and vice principal discuss essay writing and interviewing techniques, as well as test preparation. Booklets outlining and indexing high school matriculation are also distributed.

The grooming at the Center continues in the sixth grade, as there are more student-parent meetings. After applications have been sent, students submit a list of their preferred secondary schools so that administrators at the Center can push for students’ first choices, as illustrated exaggeratedly, in the Brentwood student swap. Michaud said he also makes calls on behalf of JTD students, if necessary.

“All big feeders try to represent a student’s first choice school to the admission office and we then try to make the best decision for that family,” Gregory said.

It’s in the genes

One final link between feeder schools has little to do with bustling young minds, but rather the men and women who spawned them.

Feeder schools boast parents who are active and involved in the education of their child, a quality the Admission Office takes note of, Gregory said.

“These elementary schools tell their parents that the more active than they are, the better they look to secondary schools, and many parents listen because the sending school will let us know how active a parent has been as part of the application.

Sometimes they will even write a letter talking about how a family was active,” she said.

“We like to see these kinds of active parents,” Gregory added. “But the main focus is still the child.”

Still, it is only certain types of involvement that impress Gregory and her staff.

“We don’t really care if a parent baked cookies for the fair, but if a parent has been on a board, that’s a big deal,” she said.

“We know that means they are committed to the education of their child.”

Parents are also more active financially at feeder schools, she said. At John Thomas Dye and The Center for Early Education, school endowments approach $20 and $30 million respectively, according to school administrators.

Mirman is in the process of building its endowment, but school administrators there did not have any figures to release at this point.

Harvard-Westlake currently has an endowment of more than $40 million and is working on expanding that figure, according to the school’s Advancement Office.

Gregory was cautious when discussing the schools policy on using the ability to contribute financially as a factor in admission.

“We will take risks on students for whatever reason, so long as they are willing to work hard and commit to a rigorous college preparatory program,” she said.

“We don’t get to choose students who are from families that are able to contribute financially to Harvard-Westlake, they choose us.”