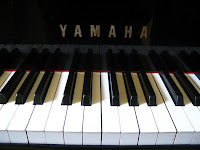 Recently, I attended a piano recital where my daughter and a horde of other people’s kids, ranging from ages 5 to 18, performed. With the exception of three of the players (not, unfortunately, my daughter), every single one of the piano students made big mistakes.

Actually, that’s putting it kindly: they mostly stunk. And yet, there was applause. Cheers, even. The Sunday afternoon dragged on interminably as sour notes built.  These kids had six months to work on their pieces, polishing them to perfection. This was supposed to be a command performance, of sorts. But instead, we listened to mediocrity.

I primarily blame the parenting and teaching culture at large for this. That whole “positive self esteem” movement has really messed with the idea of real achievement. While my daughter was waiting her turn, she muttered to her father that she was nervous. “What if I make a mistake?” she asked him.  Knowing how little she seemed to practice, I figured she’d be lucky to just make one mistake.

“Don’t worry about it,” he replied. “Everyone makes mistakes.”

“On the other hand, “ I added, “you might want to do a really great job, since everybody’s sitting here on a Sunday.”

He glared at me. Obviously, I was not a supportive parent. Then our kid sat down at that grand piano and really stunk the place up. When she finished and came back to her seat (rather sheepishly, I thought), her dad said “Good job.”

Good job??? Give me a break. It wasn’t a good job. It was a mediocre job.  And it wasn’t just my daughter doing a crummy job. The majority of the kids screwed up constantly, without any sort of sense of self-consciousness about it. After all, their teacher (a fairly hardcore Russian lady who seems unlikely, at her core, to put up with this nonsense) had even told them that everybody makes mistakes. The kids weren’t competing; there was nothing at stake here. And since all these kids are used to adults arranging their lives around their kid schedules, the fact that we all sacrificed a Sunday for this didn’t impress them, either. What else do we have to do than sit around listening to Mendelssohn being utterly demolished?

So I didn’t say anything, one way or the other, about her recital piece. Her stepfather patted her once and said, “Well, at least you showed up.” I thought that was kind.

Now, I’m not some crazy Tiger Mom with a musical agenda. I’m no nonsense when it comes to school (where my daughter has no problems with performance whatsoever), and mellower when it comes to extra curricular activities like piano. I’m not going to hang over her, screaming that she practice every day for hours. As a result, she doesn’t practice as much as she should (obviously, since her recital was terrible). But, I also know that I don’t nag her much about schoolwork, either, and she manages to handle her own schedule quite nicely. I’ve heard her practice oral reports in her room for hours (and then score great grades on them).

I think it all comes down to environment. Anna goes to Mirman, where top performance is stressed and work is pretty competitive. Mediocrity is never rewarded. Mistakes aren’t punished, but no one up at that school is going to tell her she’s done a good job on something when she most decidedly hasn’t; it would be an insult to her intelligence.

But then she goes to piano, where nothing is competitive, she’s told it’s fine to make mistakes, and no one has impressed upon her that there’s anything at stake (including, I suppose, pride) if she screws up. It doesn’t matter what I say about it, since I’m just one voice and she has many telling her something very different. There’s no incentive to work really hard and play a piano piece perfectly if everyone gets a rose and applause, right?

This experience of reward for mediocrity extends beyond the piano recital, though. Recently, I’ve seen blog posts from mothers bemoaning the recent school practice (both public and private) of having “graduation” every time the kids switch a grade. What, exactly, makes moving up from 4th to 5th grade an accomplishment? Isn’t that the least we can expect? Matriculation from lower to middle school, or from high school to college, makes perfect sense; one marks a boundary from childhood to early adolescence, the other a switch from home and comfort to a completely different living and educational situation. But, if the kids “graduate” every year, what becomes special about graduation, anyway?

I’m planning on switching piano teachers soon. While I have no issue with Anna learning to play and enjoying it, I’m tired of the recital charade twice a year. It’s meaningless, and in fact might be harmful. We do our children no favors rewarding lousy performance. Later in life, just showing up isn’t going to cut it, and kids who have been raised this way will be confused later by the lack of praise directed their way.  Some competition, some pride, and some high expectations are all great things to give our kids; without these things, they’re going to find life in the real world difficult indeed.