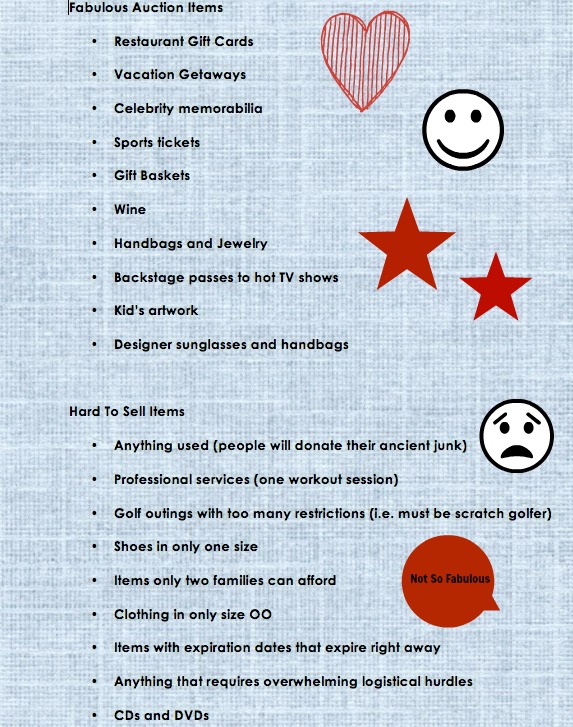 When my daughter was in 1st grade, I co-chaired the auction at The Willows School. This is the school’s biggest annual fundraiser and I knew it would be a lot of work. So, I was thrilled when I found out who my co-chairs would be. They were a talented group of professionals who had skills beyond my wildest dreams. We worked together for about nine months from start to finish. When the event was over and the totals were tallied we raised more than $200,000. It was like a full-time job for many of us and at times our nerves frayed, we argued and stress took over. Yet in the end, the event was lovely and successful. We took risks by moving the event to a new venue. We solicited items the school had never auctioned previously. We drank, bid, ate and partied the night of the auction. A fun time was had by all.

Here’s what I learned. 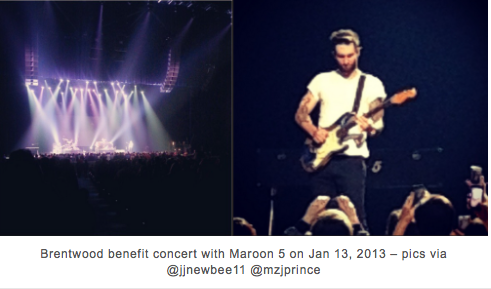 Here’s my post about the scoop on private school galas on The Daily Truffle. (Also published on The Huffington Post.) 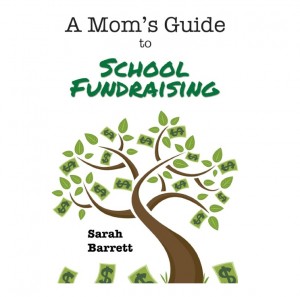 Check out A Mom’s Guide To School Fundraising. Sarah Barrett, an experienced mom, covers everything from lemonade stands and bake sales to auctions. And, she has an AUCTION SUCCESS KIT! You can read my write-up of the book here.

As Thanksgiving creeps up on us, I’ve seen my Facebook and other social media feeds filled with people giving one thing they’re grateful for in order to cultivate looking at the good instead of focusing on the bad. While I generally eye roll at the practice as suddenly everyone’s husband/wife/child/pets/job/plumber/waxer/proctologist is the best ever, I am particularly grateful for one seemingly odd thing: I got to accompany my son on a field trip.

The three years he spent at an expensive L.A. private school were filled with the usual politics that I still find disturbing. The administration deemed which parents were worthy to spearhead what committee. More often than not, those leaders were also the big donors. Coincidence? The same happened with Room Parents. You could not volunteer to be one, you had to be deemed worthy by the administration, receiving an email in later August. These women (always Room Moms, never ever Room Dads) gained special access to the class that non-chosen parents didn’t. They could go to all the parties, go to other special events in class and at school to take pictures for the yearbook and organized who did what for each such gathering. Part of their duties also included deciding which parents could go on field trips.

Back in my private school elementary days in the 1970s and 1980s, if a parent wanted to go on a field trip, they signed up to go and they went. But at this private school it was a super- special designation. Though it was supposed to be blind, with the names of the parents who wanted to go drawn out of a hat, that of course was not the process. Every year, the close friends of the Room Parents went on the field trips. Three years and nine or so field trips and I never got picked. Not once. I’m not good with the maths but I’m pretty sure that’s not statistically accurate. My son would always ask “Why aren’t you going?” and be disappointed, which was heartbreaking because he still wanted me with him.

So imagine when I got the email from my son’s teacher at his new public school asking for volunteers to chaperone a museum trip. I replied “I can go!” lightening fast. I was in. So easy. I was in! The night before the field trip my son seemed to be getting sick so I alerted his teacher that we might have to miss it and to maybe contact a back up parent. “We already have more than enough parents going so don’t worry about it.” So what you’re saying is that a group of parents volunteered to go with their child to the museum, and they were all allowed to go? But, that’s too easy. And fair! So not private school.

Not only did I have the pleasure of accompanying my son and a group of his peers for the day, I was given, a week later, a binder ring on which thank you notes from each student had been personally written to me on index cards. Each class member, whether or not they had been in my group, thanked me for going and had them write one thing they learned on the field trip, so the activity was one of gratitude but also a comprehension check for the teacher.

One of the things that also struck me as odd about our private school was the lack of gratitude towards parents. Yes, donors were acknowledged on the prominently placed public donation tree plaque and rewarded with their name for all to see (and no one chose Anonymous). And of course the highest-ranked parents were rewarded with the prestige committees and privileges. Parents were thanked as group, mostly for showing up to something like a winter or spring concert. But year after year almost no holiday gifts were made for the parents. There were no Mother’s Day and Father’s Day glued together macaroni art, mismatched bead necklaces or cards made. Unless you were designated as a strategically important parent, even the kids didn’t thank you sincerely, let alone anyone else.

Of course no one volunteers on field trips to receive praise (I hope). And holidays aren’t about the gifts (technically). But there is something to be said for cultivating the proverbial attitude of gratitude. Something more than the kids responding in unison to the teacher prompting “Lets say ‘thank you’ to the parents.” Something to recognize all that parents do, even if the campus shuts them out.

On his index card my son wrote to me “Mom, thank you for coming on the field trip. You made it the best field trip ever!!” Why shouldn’t every parent have that opportunity, regardless of their donation size or popularity?

Jennifer Smith* was a mom at a fancy westside K-6 school where she tried to play nice until she couldn’t anymore.

*Not her real name

It can look intimidating at first. You’re at a new school and you look around. The other moms all look richer, more confident and more involved in the school than you’ll ever be. On top of that, they already seem to know each other. It’s hard to imagine you’ll ever fit in.

Every time I started a new school, or even a new class within the school, I felt that way – destined to be left out. For my family, paying for private schools was a struggle and we sacrificed things to make it happen. Fancy cars and a big house and swank vacations were among the things that we didn’t have. At first glance, you believe you’re the only one without. You also get the sense that either everyone is a stay-at-home mom and you’re not, or that everyone has a job and you don’t. (I’ve been on both sides of that coin).

The funny thing is I can say eighteen years into the L.A. private school scenes, my worst fears were never realized. I always found my people. It’s not always easy, but in fact I would say that of every class of all three of my kids I not only found my place, but took away really good friendships, many of which endured long after the kids stopped hanging out.

If you just drop your kid and run and never get involved at all it’s harder than if you find some committee to join. I mostly worked and couldn’t be one of those rabid PTA moms. There is always a group of moms at every school that seem to run the place. God bless them. They are generally extremely hard working and efficient and way over qualified to serve as much food as they do. They are at every event, befriend each other and it’s not a bad idea to be nice to them, because they know everything that’s going on and sometimes it’s good information.

The flip side of this group is that I’ve seen women nearly go to fisticuffs over whether or not to put the fork in the cake or have people take their own fork. My personal preference is never to get involved with committees that involve food. All the real problems go down there. The battle over healthy food versus sugar snacks alone is enough to send me running to the hills. But they also get into it over serving in a earth friendly way or how to handle food in a totally germ free manner. These things don’t interest me, but I’m always nice to those women because they also know who is about to leave or get fired and what things you need to do to get your kid in certain classes or on certain teams. They are an invaluable resource for those with no opinion on snack food.

I know for women with full-time jobs it’s impossible to dream of adding some committee or serving a lunch, but there a few committees worth popping in on. The fundraising ones usually get you invited to the best parties even if you aren’t a big donor. Generally they involve a couple after hours meetings and making four or five phone calls. Easy breezy and you’ll meet people and be thanked for your service. Or show up at some of the weekend events… even if only one or two in the year to see who’s there that might be fun to meet. It will be worth your while.

The very best source of friends at your school of course is your kid. My kids had surprisingly good taste. They gravitated towards kids from families not dis-similar to ours and usually from that playdate structure a friend would emerge. (This is of course much more difficult in high school where the kids try and prevent you from meeting their friends much less the friend’s mom.)

That does mean however when your kid says they want to play with someone, you have to try and help them make it happen. No eye rolling, postponing, or shoving it off on your husband or a nanny. Every play date is a possibility not just for your kid but for you and maybe even your family as well. You might even discover a family can vacation with. In my son’s current class, two families are going to India together next year for two weeks. They aren’t even that close and their kids are not particular friends, but the mom’s hit it off and an amazing trip is in the offing.

A play date that ends with a glass of wine is often the start of something fun. Most schools say they offer “community” and while not required, finding your place in that community generally adds to your experience and that of your child.

Don’t miss a thing! Like Beyond The Brochure on Facebook for events, articles, blog posts and more!