Looking At The School From The Inside
Unless you’ve been living in a cave somewhere, you already know the basics when it comes to assessing a private elementary school for your child. You’ve already balanced your educational belief system (progressive or traditional, etc) with what your child needs (and they don’t always match up). You’ve eliminated schools that would require a daily helicopter ride to attend. So far, so good.
There is, however, another side to choosing a school. Your child is the major attendee, of course, but you will end up attending the school as well. All private elementary schools demand a certain amount of volunteerism and annual giving. And sometimes, it’s really hard to get a grip on what the parent body (and subsequent pressures) really is at a particular school.
So you’re going to have to dig. Try talking to current parents of the school and subtly getting the scoop. For instance, every school has big fundraisers every year, but some are much more low key than others. You might prefer a daytime fair to a nighttime black tie event, for instance. But you won’t know that unless you inquire about the nature of these events. If the school holds events at exclusive country clubs, where the price to join is $100K, you can be fairly certain that parents at the school have memberships at the club and do their socializing there. That’s great for those who have memberships at the club, but what about those who don’t?
Another good indication is the type of silent auction items that are in demand at a school. All private schools have these silent auctions (and guess who supplies the goods? YOU!!!). But while at one school the hottest item that went for the highest price might be some great Laker tickets, another school might offer a pricey dinner party catered by a family’s private chef, at their mansion. Or, to ratchet up the bidding, how about a trip on a family’s private plane to a lavish vacation home, fully staffed (also owned by the same family)? These are status symbols that garner big payoffs for the school. What’s important to you, and fits with your value system? Remember, you’re going to have to put up with this production every year, so you might as well be able to tolerate it.
How about teacher and staff gifts? This has been a longstanding issue at many a private school, since elaborate gifts (think the latest Gucci bag kind of gifts) are often given out quite liberally by wealthy parents. This could be seen as some sort of bribe. Some schools have a very strict policy regarding gifts (Mirman is one of these), and simply doesn’t allow expensive gifts to rain down upon the teachers. Other schools have similar policies, but the parents blow them off and distribute the largesse anyway. Try to get a parent to answer these questions honestly, because it will save you aggravation later. (See piece below about Holiday Gift Giving)
In previous posts, we’ve squawked on about the cars in the carpool line. Are they window tinted Escalades or a bunch of Priuses? Yes, it seems so shallow and judgmental, but if you aren’t a luxury car driving parent, a parking lot full of Range Rovers and Porches might not really mesh with your priorities.  You know that totally obnoxious car ad involving the boy embarrassed by his parents’ car? Do you want your kid to start making those snotty noises at you?
And speaking of snotty noises, you should try to find out what the celebrity quotient is at the school. Now, there’s nothing wrong with celebrities. L.A. is full of them, and they help keep our economy afloat (when they’re not collecting swag, that is, but I digress). I went to Crossroads a million years ago, and I benefited greatly. For instance, when we did a Sergio Leone unit in English Communications, James Woods came in to talk to the class about “Once Upon a Time in America.” Ditto for Martin Sheen during our Conrad Heart of Darkness and Coppola “Apocalypse Now” section. It was incredible.
What wasn’t incredible, though, was being at a school heavily dominated by industry types when I didn’t come from an industry family. So, if you are in the industry, you’ll probably have no issue sending your child to a more “Hollywood” school. But, if you aren’t involved in entertainment, it might seem much less appealing.

Finally, all you moms applying to schools out there, please check out the current mothers at the school. Although I’m a firm believer that there’s a place for everyone in the universe, shared aesthetics and values are important. If you’re a crunchy mom, you might not enjoy a school full of moms wearing 3-carat diamonds and pumped with enough Botox to kill a small village. Just saying.

Jenny Heitz has worked as a staff writer for Coast Weekly in Carmel, freelanced in the South Bay, and then switched to advertising copywriting. Her daughter started 4th grade at Mirman School this year. She previously attended 3rd St. Elementary School. Jenny has been published recently in the Daily News and on Mamapedia, The Well Mom, Sane Moms, Hybrid Mom, The Culture Mom and A Child Grows In Brooklyn. She now writes about gift ideas and products on her blog, Find A Toad.
Like Beyond The Brochure’s  Facebook Page! 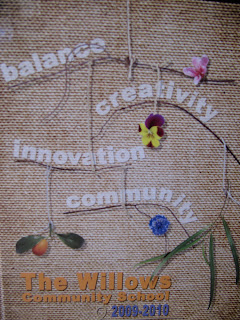 Finding out what families at a particular school are really like is one of the most challenging and elusive parts of the private elementary school process. Of course you want the school where you send your child to be a great place for your child and you. But how can you be sure that will happen?

If you’ve been on a private elementary school tour, the tour guide may have been a parent at the school. Most likely, the school selected a friendly and knowledgeable person to lead the tours (this is a highly coveted volunteer job). But, not always. We went on one tour where the mom leading our tour was rude, snobbish, couldn’t discuss the school’s curriculum and wouldn’t make eye contact with us. But, we did find out that her husband was an important plastic surgeon (who, it was obvious, had done work on her face) and she was wearing Chanel! Not exactly what we were looking for. We passed on that “trophy” school. It was hard to ignore her behavior and look at the school beyond the tour guide. If we had like the school more, we would have gone back for a second tour.

So how can you find out more about what the families at a school are really like? It can be hard to ever really know until you’re actually a parent at the school, because you don’t know which families will be in your child’s class. But, here are a few tips to give you some ideas to sort it out:

Look at a school’s yearbook. You can get a feel for the school from the yearbook photos, theme and style.

Look at the “feeder” preschool to the elementary school. This can give you a clue about the families. If the elementary school accepts a lot of kids from a co-op school or a temple school that might help you understand the type of families your child will go to school with.

We’ve said this before, but if possible, try to go to school events like Book Fairs and other events where prospective parents can mingle with existing families.

Ask people you know about the parents at a school you might want to apply to. Be specific. If you’re concerned about a particular issue, ask a parent who is already there.

Each class and each grade is different. And, the economic cycle may impact who a school admits for financial reasons. Schools may change over the years and admit more families on financial aid in some years and wealthier families in other years.

If you want an ethnically diverse school and you don’t see diversity when you visit the school, it may not be the right school for you. Don’t assume it will diversify by the time you arrive…it takes years to build a diverse student body.

Sometimes you just know it’s going to be the right school. That’s a great feeling!