If you know the school, leave a comment! Check the comment section for the answers in a few days!

Please join us for this event hosted by MomAngeles and sponsored by Academic Achievers, a full-service tutoring agency specializing in Kinder-Prep.

Who: Christina Simon and Porcha Dodson, Beyond The Brochure co-authors and

Where: Kidville in Brentwood

Tickets are $25.00 per person and $40.00 per couple. Visit Momangeles for more information.

Parents only, please. We look forward to seeing you there!

Reserve your spot! Get Your Tix!

My good friend, Gina Osher, writes the wonderful blog, The Twin Coach. Gina’s boy/girl twins just started kindergarten at a Westside private school. Here’s her recent blog piece about whether to separate them in different classes:

Have you ever heard that comment “I was a great parent until I became one”? I feel that way a bit about starting my kids in Kindergarten. I was a huge proponent of separating twins in school until I actually had to do it myself. Now I find myself longing for the simple days of preschool when they were in one, cozy classroom.

Don’t get me wrong. I am not changing my stance on separating multiples in school, I know it was the right thing to do for my children. I can tell already that they will be so much better off being in separate classrooms. But Mommy is having a hard time. Actually, mommy might be having a bit of a mental breakdown.

Located on a gorgeously renovated movie studio, the campus has a hip, urban vibe, much like the famed Dalton School in New York City, where the classrooms are on multiple levels and stairs are used to access various levels within the interior of the building. Big windows flood rooms with light. Kids flow from the main building out onto an artificial turf athletic playing field, next to a garden and outdoor classroom.

Turning Point’s blueprint has inspired a school filled with colorful hues, spacious classrooms, dynamic teachers and a diverse student-body. The architecture of the campus is roomy enough for virtually every grade level to have its own space. Some areas, like the music room, are shared by multiple grades. The preschool has occupies a separate building.

Walking through the school with Christian Davis, the associate director of admissions, I felt like I’d encounter something magical around every corner. As we visited classrooms, I learned a lot about each part of the school. Smart Boards are a feature in every class. Music is central to the curriculum, starting in Primary with the xylophone.  Wind instruments  are introduced in 5th grade.

Touring with Christian, I quickly realized he’s the kind of admissions director parents shouldn’t be worried about calling to ask a question or just to touch base. He’s so nice! Easy going and accessible, he’s well versed in the school’s many programs. His manner instantly puts one at ease.

Head of School, Deborah Richman, has been with the school since its early days. She has been the driving force behind Turning Point’s impressive expansion. Her vision has created a modern school, valued by parents for its sense of community. Nothing about the school is antiquated or outdated. There’s a cutting edge-ness to it that I felt instinctively drawn to.  From the kid-inspired kindergarten classrooms, to the language center and the outdoor classroom, layers of this energetic school unfolded before my eyes. It has a delightful, whimsical quality, reminiscent of an Alice in Wonderland adventure.

Turning Point is a developmental school with a Montessori based program for Primary and K-1. Mixed age classrooms are a key feature of the Montessori philosophy and Turning Point’s Kindergarten and 1st grades are separate, but interact during portions of the day. Students in Primary and K-1 remain with the same teacher and classmates, per the Montessori method. This gives kids the chance to learn independently, while collaborating with their peers and older kids. Then, when they become the oldest in the class, they take on a leadership role by mentoring younger children.

There’s definitely a “wow factor” when you walk into the The SmartLab. It is a highlight of the school and rather unique: it is one of two labs of its kind in Southern California. What is the SmartLab? It’s a hub of new technology where students get hands-on learning experience.

The Smart Lab teacher, a young guy named Travis, was enthusiastic as he talked to us about all the learning that’s happening in this mega-lab. SmartLab becomes part of the curriculum in 5th grade. It is offered as both an elective and a requirement in Middle School. It is also offered as an after school class and as an option in the summer specialists’ camp. Let’s just say the SmartLab caught my attention—and held it.

The new theater gives Turning Point serious bragging rights. It’s a place for the performing arts that hits all the right notes! Generous families, including a heavily tattooed pop-rock star whose name adorns the building (due to his generous donation), made the theater possible.

Turning Point offers students all the extras, within an environment rich with the classics to foster each student’s talent. But, it hasn’t lost sight of its mission, which is to educate and nurture each student, focusing on the whole child. Perhaps the school’s mission statement says it best: “Turning Point provides a harmony between structure and freedom…”

The best way to describe Turning Point is substance without pretense.  It’s a place where kids thrive in an effortlessly cool setting. Its very apparent that students at Turning Point are encouraged to be expressive, to get creative and challenge themselves in all aspects of their education. It’s a school where one size doesn’t fit all.  That’s sure to please prospective kids and parent alike! 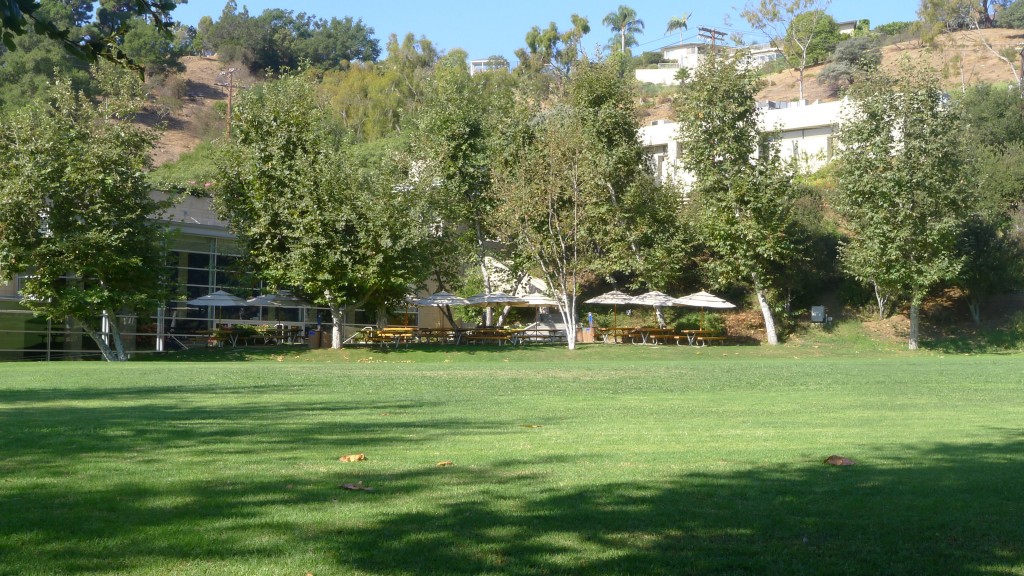 The first thing any visitor notices upon arriving at St. Matthew’s Parish School in Pacific Palisades is the stunning campus where nature takes center stage on 30 acres in a beautiful park-like setting.

West Coast warmth infused with the gravitas of an East Coast prep school makes for just the right combination at this well-respected institution. Virtually everything about St. Matthew’s is reserved and understated. In our city of over-the-top lifestyles it is refreshing to see this quality in a school.

St. Matthew’s was founded in 1949, but it has been significantly updated. From the classrooms to the technology for learning (Smart Boards, iPads and more), St. Matthew’s has done an amazing job remodeling and rebuilding all of its 28 classrooms, the enormous library and virtually the entire campus, in part with a recently completed capital campaign. The look and feel of the campus is rustic and modern.

Head of School, Stuart Work (also known as Stu), and Jane Young, the principal, were generous with their time as I sat with them in Stu’s office talking about what make the school unique. Stu is thoughtful and articulate, with a firm handshake and a direct gaze. He is a former science teacher and accomplished administrator who adores kids and is obviously extremely proud of his school. He took the helm at St. Matthew’s in 2011. Walking around the campus, he seemed to know every student. Jane, a member of the St. Matthew’s community for more than 30 years, as an alumni parent and teacher, is warm, outgoing and approachable.

St. Matthew’s is a traditional school, both in its academic philosophy and its religious values. As part of the St. Matthew’s Parish, the school has embraced both spiritual growth—kids attend chapel and religious class each week—and rigorous academics, creating an enviable educational institution.

As Jane describes it, the school combines academics and a deep moral and spiritual foundation, rooted in its three faith-based elements: SERVE, LEAD, FLOURISH. Sixty percent of families belong to St. Matthew’s Parish, and there are a number of different religions at the school.  All are welcome. The school is known in the community for being open to all faiths and very respectful.

St. Matthew’s is small (325 students total). There is one class per grade, with about 24 students and 2 teachers.

The kindergarten classroom is very spacious and bright. Natural light streams in from big windows giving the young students a glimpse of the outdoors as they learn. There is also a separate break-out room where they work on projects.

St. Matthew’s embodies a strong tradition of community service for all students, which is integrated into the curriculum. Students participate in a variety of volunteer and service learning activities from partnerships with St. Anne School to raising money for an Episcopal school in Haiti to working in the St. Matthew’s thrift store in Venice. 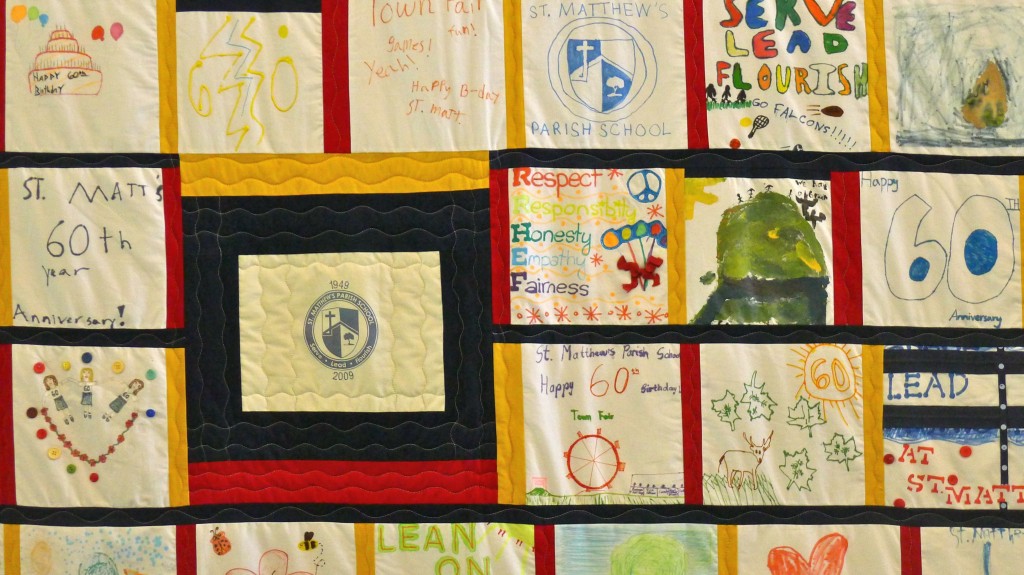 Stu and Jane enthusiastically described one of the school’s signature programs: grant funding for teachers to visit places that correlate with the study units they teach. Costa Rica, Haiti and Africa are a few of the locations where 1st and 3rd grade teachers have traveled.  Returning to St. Matthew’s, teachers bring back a deeper, first hand understanding of what they are teaching.

Walking through the various classrooms from K-middle school, touches of tradition are noticeable from the moment one enters the school. Classes are orderly, fairly structured and calm. Students wear uniforms and address their teachers by their last names, all hallmarks of a traditional school. Yet despite the fact that several classes were taking quizzes, students were friendly and welcoming to the head of school and his visitors.

Leaving the kindergarten classroom, Jane pointed to an example of the school’s belief that mistakes happen and that’s fine. She pointed to the steps, where the artist who created them had inadvertently laid the wrong letters side by side. She explained that the artist offered immediately to fix the error. Instead, she told me they decided to leave it. Serious and focused, the school isn’t afraid to let its sense of humor show!

St. Matthews is recognized for its sports programs. Many athletes go on to play high school and college sports.

Admission to St. Matthew’s is competitive. The school is especially popular among Palisades and Brentwood families. However, both Stu and Jane pointed out that they encourage families to remain on their active wait-list if they are not admitted right away. The St. Matthew’s wait-list is one that does have spaces open up and admits families.

The primary points of entry are Preschool 1 and 4th grade, with spots open at 5th and 6th grade. Kindergarten admission is based on attrition from the preschool. “Keep applying” Stu and Jane told me is their message to families who are wait-listed. For those who are not part of the St. Matthew’s parish, being active in your own religious institution can be an asset for admissions.

St. Matthew’s is certainly a school for a traditional family looking for that perfect mix of rigorous academics, faith and community.

Now I know why!