The Switch: From Public To Private School: The First Week

By now, I probably don’t need to reiterate that my daughter switched, at 4th grade, from 3rd St. Elementary (a public school), to Mirman School. And last week was her first week.

As with any beginning, adjustments abound. And Anna* hasn’t had the greatest track record when it comes to school switches. Take, for instance, her first month or so at Montessori Shir-Hashirim preschool. I believe she spent most of it engaged in a one-child boycott of school activities, on the floor under a desk where she would be forcibly dragged out and made to do “jobs.” She was tough; the staff there was tougher. Eventually, she was broken and became a participant. But she was always on the bench (upon graduation, my mother offered to donate a bench named in Anna’s honor).

Cut to the switch to first grade at 3rd St. As I’ve previously written, she was assigned a truly dreadful first year teacher (ironically, according to the just released LA Times teacher standardized test scores, this teacher would have been considered “good.” This teacher was proof positive that the STAR tests can’t be the sole criteria used to evaluate a teacher). Anna butted heads with this woman immediately. She flaked on the homework assignments (copious amounts of busy work for six year olds). She skipped out after going to the girl’s room during class time and played on the monkey bars. She exhibited the rebellious behavior of a bored teenager.

There were other things about public school that rankled. I don’t think I’m exaggerating when I state that the social scene is a bit like Lord of the Flies. Anna, in first grade, got a romantic offer from a fifth grader (my advice to her: never go near that little cretin again). She was the victim of a truly sophisticated form of girl terror in first grade the likes of which surprised me; I had no idea six year old girls could be that socially ruthless in the pursuit of power.

It only got more bizarre in third grade, when she was the recipient of an anti-Semitic comment. I grew up in L.A., and I have NEVER experienced any sort of anti-Semitism. To the school’s credit, it handled the situation well, but I felt sort of sad that Anna had to deal with that kind of garbage at all.

So, given her track record, I was fully prepared for some trauma upon switching to Mirman. What would the week bring?

I first thought that the uniform would be an issue. Anna has a definite style. But, as it turns out, she actually finds the uniform a relief. She has almost no decisions to make in the (very early) mornings now. She likes the shorts, the polo shirts, and the utility of it all. She’s even started wearing her glasses every school day.

Next, I was worried about the social makeup. It’s a small school. And Anna is the only new fourth grade student. Talk about being the ultimate new kid, and perhaps a real target. But I’ve seen none of that. The first day, Anna did say, “Well, I already have an enemy.” She said it in such a cheerful tone of voice, though, that it didn’t seem to be a concern. Sure enough, by the end of the week, she decided the girl was “really nice.” Of course, there’s one noisy, obnoxious boy whom Anna claims to loathe, but that’s par for the course in any classroom.

Next, I was concerned about the schoolwork itself. And it’s pretty clear to me that she’s behind in math. She told me that there’s testing this week, and that it was going “badly.” I’m sure it’s hard for her to go from having it so easy in public school to feeling far behind in private, but math is something that can be taught, and she’ll just have to learn it. It’s a valuable lesson best taught at an early age.

The biggest snafu was a carpool screw up which left Anna stranded at Mirman on Thursday. No one was amused. Anna’s abandonment freaked her out a bit. And it’s hard to describe my panic, being fifteen miles away from the school with rush hour rapidly approaching. On the bright side, I highly doubt a massive carpool fail such as this will ever happen again.

But these are small problems. The big picture is overwhelmingly positive. When asked about her first week, Anna gave it a “seven out of ten,” mostly because she was left up there on Thursday. That’s not bad for a first week at a new school. The best thing she said, though, was after the first day. Every day after school since first grade began, I’ve asked her, “What did you learn today?” For years now, she’s either said, “Nothing” or “I can’t remember.” But that first day at Mirman, when I picked her up, she volunteered information.

“Guess what I learned today, Mom?” she asked.

“About a million things,” Anna answered.

Jenny Heitz has worked as a staff writer for Coast Weekly in Carmel, freelanced in the South Bay, and then switched to advertising copywriting. She now writes about gift ideas and products on her blog, Find A Toad. 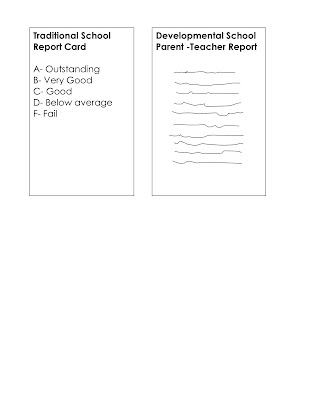 Most of us are familiar with traditional schools and their grading systems “A-F”. To give you an idea of how students are evaluated at a developmental school, I thought I’d share part of my son’s first grade parent-teacher report from The Willows lower school (At the Willows Middle School, students are graded based their class average in each subject).

Here is an example of my son’s first grade Parent-Teacher Report (not including social studies, science, art, music and P.E. or the overall individual assessment).

Language Arts: Throughout the school year, the focus of the language arts curriculum has been on acquiring decoding skills in both whole groups and small groups. In the second half of the year, developing reading fluency and comprehension has been our goal. A systematic approach to phonics instruction has provided students with a strong foundation from which they can decode increasingly difficult material. A greater emphasis has been placed on writing during the second half of the year as well, as students learned about the elements of a story and the components of a complete sentence. We’ve also focused more on grammar, learning about parts of speech, including nouns, verbs and adjectives.

Christopher* demonstrates excellent reading skills. He is working to make his reading more fluent and expressive. When Christopher encounters an unfamiliar word, he segments the word into individual sounds, and he is able to “sound switch” with teacher assistance. His developing comprehension skills have allowed him to understand vocabulary and story themes. Christopher incorporates conventional spelling in his writing, adds details to all writing assignments and is learning how to utilize the conventions of punctuation and grammar.

Math: Christopher loves math and enjoys solving problems. He is able to solve addition and subtraction number stories, use <,> and = signs appropriately, recognize geometric shapes and sort and identify attributes. Christopher knows how to exchange money and calculate combinations with pennies, nickels, dimes and quarters. He can distinguish time to the hour, half hour and the quarter hours. Christopher is able to measure objects, understand odd and even numbers, and demonstrate an understanding of place value. He continues to learn strategies for more complex addition and subtraction problems. Christopher is able to communicate his thought process for solving problems orally. 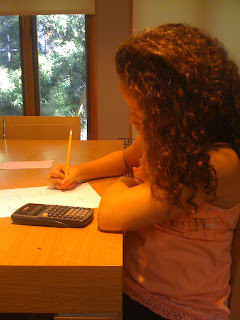 We have a few days before school starts on Sept. 7th. At the beginning of the summer, the Willows School posted a math packet for incoming 4th graders, my daughter’s grade (and a packet for my 2nd grade son too) on the school website. I logged onto the school’s website and voila, there it was. All 200 pages of it! Due back in September to the teachers. What a fun summer this was going to be.

But, my husband, a college math major, worked with our kids every morning to complete this packet. It wasn’t always a pleasant way to start the morning.
Sometimes, I walked in to hear, “I don’t want to do math!” Other days, it’s “look what I just did!” The kids worked at the dining room table on their math worksheets. Progress happened. Everyday brought a new mood. But, they both like math. He also found a great online math program called IXL, which allows the kids to work on math from their computers and then sends the parent a report of what they’ve done.
In Beyond The Brochure, we discuss the different types of private elementary schools in LA. In general, developmental schools believe that kids learn at different levels of readiness and the curriculum is multifaceted to allow for learning at various levels. Children are encouraged to participate in the process of learning. Traditional schools will most likely have a curriculum that requires every child to master each subject at a certain pace.
What makes The Willows, a developmental school, different than a traditional school, is not so much what is taught, but how it is taught. My kids get math worksheets, similar to traditional schools. They take spelling tests each friday. They take tests during the week. Kids are put into groups for math based on ability. Kids are pulled out for more advanced work based on ability. Same for reading. My daughter took the ERB standardized test last year (3rd grade).
But, what I think is truly unique about The Willows is the integrated curriculum. If the kids are learning about the ocean in class, their work in computer lab will be connected to the ocean. Their work in art class will be also related to the ocean. Field trips will be to places where they learn about the ocean. And so on. It’s all connected in the most amazing, creative way. This doesn’t happen by accident. It takes a lot of work on the part of the teachers and administrators to facilitate this type of curriculium. But, my kids come home enthuiastic about almost every subject, including math. My daughter’s lesson on fractions started with the kids baking and using the measurements to understand fractions. They ended the lesson eating the cookies they baked! If I had to pick the most important part of their education at The Willows, the integrated curriculum would be at the top of the list. The Willows School.
Are you thinking about whether a developmental or traditional school would be best for your child? What are your questions? We like getting reader questions that we can answer and post. Let us know your thoughts. Leave a comment!